The Legacy of Slavery

Dr Clifford Hill
THE MOVEMENT FOR JUSTICE AND RECONCILIATION was born out of the desire to draw public attention to one of the great injustices of our age: the legacy of slavery. The year 2007 was the 200th anniversary of the abolition of the Atlantic slave trade when a survey showed that only 9% of the white British population claimed to know “a lot” about colonial slavery. 200 years of silence had kept the British population in ignorance of what their forebears did in Africa and the Caribbean and the 12 million enslaved Africans who died in enforced transportation crossing the Atlantic via the so-called Middle-Passage.

Colonial Slavery
Few people today know that in 1833 when slavery was abolished throughout the British Empire £20 million (according to the National Archives currency converter that would be worth £1,000,000,000 today) was voted by Parliament to be paid to the owners of slaves in the West Indies (many MPs had interests in colonial slavery and benefited from this). But not a penny was paid to the slaves themselves: an injustice that has never been acknowledged and has left a legacy of underdevelopment and poverty in the Caribbean islands.

'White' Slavery
It was not only in the colonies that injustice and oppression caused great suffering to the poor and the powerless; in Britain it took 46 years of campaigning in Parliament to pass a law forbidding the employment of children as young as 9 in factories, mills and down the mines for more than 10 hours per day. It was quite common for these children to work 14 hours a day in dangerous, unhealthy and brutal conditions ‘The 10 hour Bill’ was introduced in Parliament in 1801 but it was 1846 before it was actually passed to protect children from gross exploitation, cruelty and physical abuse. They were the children of the poor; the powerless urban peasants produced by the Industrial Revolution. They had no vote; no representatives in Parliament; no social status: it is therefore no surprising that Wilberforce described them as victims of ‘white slavery’. 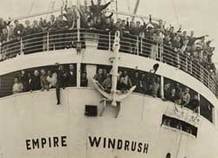 Migration
In 1948 Caribbean men, many of whom had served in the British forces during the war, began coming to Britain as economic refugees escaping poverty at home and drawn by the shortage of labour in post-World War II Britain. Their Labour was welcome but their presence in working class neighbourhoods was resented. “Sorry no Coloured” greeted them in shop windows advertising rooms to let. It takes a long time to change the culture of a nation and 60 years (and several Race and Community Relations Acts) later, injustice and inequality still linger.

The 2011 Riots
The shooting dead by police of a young man from the African-Caribbean community in London in August 2011, sparked the worst communal disturbances seen in Britain since that 1980s riots. Two days after the shooting a small group of family and friends went to the local police station in Tottenham High Road seeking information. They were left standing in the street: no senior police officer came to address them or answer their enquiries. This led to a much larger demonstration that evening which sparked three nights of chaos where gangs of hooded youths indulged in indiscriminate looting and arson. Copycat violence spread to other parts of London and a number of other cities such as Manchester, Birmingham, Liverpool and Bristol.
Legacy of Slavery
The riots had little or nothing to do with race: but were an explosion of pent-up frustration and injustice suffered by many in an affluent society to which the social media and advertising gives them constant reminders but denies them access. The rioters were mainly young people from a variety of cultures who were victims of inner-city ghettos of unemployment, and lack of opportunity. They were a vivid demonstration of the legacy of slavery: the daily outrage of shared deprivation and poverty.
| Home | About | Legacy | Stories | Work | Projects | Resources | Exhibition | Who's Who | Contact | News | Donate |