What connection is there between exploitation of African slaves and working people that took place 200 years ago and contemporary society?
A WINDOW INTO THE PROBLEM
In the summer of 2011, following the shooting by police of Mark Duggan, rioting and looting occurred on the streets of Tottenham. Over the next dew days this spread to other parts of the UK, including Manchester, Salford, Birmingham, Liverpool and Nottingham. Condemned by an outraged Establishment as "pure criminality", other observers saw something deeper being revealed: an explosion of frustration evidencing a deeper malaise.
This was not a 'black' problem. As well what could be clearly seen on the TV reports, arrest records showed 46% white and 42% black.[1] It was also not a 'gang' problem: most convicted rioters were not gang members. What was clear, and shared in common across all areas where rioting occurred, was that the majority of those who took part were from the UK's most deprived areas.[2]
In the articles below Alton Bell and Derek Purnell give personal views on the legacy of oppression as evidenced in their communities.

BREAKING THE CHAINS OF SLAVERY - Alton Bell
Have you ever wondered where the anger and rage, exhibited by some of our young men in the UK, emanate from? Have you ever thought why is it, that a large proportion of our Black men think that it is OK to have children with multiple women? Does the fact that so many of our young women are single parents bother you? What about the Strong Black Woman syndrome; do you suffer from it? Additionally, why does the Black Church continue to ignore the ongoing impact of slavery, particularly on Christians?
I believe only deliverance can reverse what I would describe as the ‘curse’ of slavery. What is Deliverance? It is a process that sets people free from the mindset that dictates short-termism, working against each other (the ‘crab in the barrel’ mentality), and procreating without taking responsibility. It is the means of getting people to understand their cultural, spiritual and economic heritage. If we believe that the truth sets us free, we need to engage with our history – warts and all – and confront issues that still affect far too many Black people. How do we start the process? Here are the first three steps: 1. We need to make Jesus Lord of all areas of our lives. 2. Forgive all the countries involved in the slave trade. 3. Find out as much as you can about your ancestry, to deal with generational issues. This freedom is not about hating anyone, but about loving ourselves as people of God, made in his His image.
OPPRESSION OF THE BRITISH WORKING CLASSES - Derek Purnell
It is very difficult to compare the experience of the working classes in the Industrial Revolution (commencing in the 1780s) and the experience of people that were torn from their homelands, treated as a commodity and pressed into slavery in a distant and alien land.  The contexts are very different as are the heritages of the descendants and it may not be helpful to attempt to make too close a comparison.
It is evident however that the working class of Britain experienced oppression, cruelty, restricted lifespan and were also treatment as a commodity. To consider the experience of the working classes in the Industrial Revolution is to some degree not to see the whole picture as their experience was not too distant from the ‘Feudal System’ of the Middle Ages. Villeins, sometimes known as Serfs, were poor (often very poor), were given land to work and had to provide free labour, food and service whenever it was demanded. Villeins had no rights and they were not allowed to leave the Manor and had to ask their lord's permission before they could marry.  At the time of the Industrial Revolution workers may have been considered free but had no political or economic power.
Robin Gamble makes a strong assessment and backs it by citing the conditions of the times: "For the industrial work force, their labour was virtual slavery. The working day was long (twelve to thirteen hours in the mills, usually longer in the workshops) while life was short (forty years was not unusual)...."(1) Two politically and religiously distinct social commentators Fredrick Engels in ‘The Conditions of the Working Classes....’(2) and William Booth ‘In Darkest England‘(3) register such similar observations which is not only strong evidence of the truth but a indictment against the governments of the day. 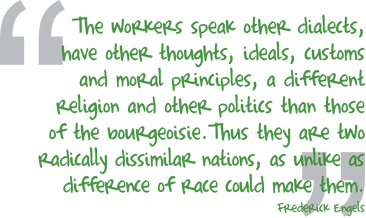 Unfortunately the problem is not consigned to history; after engaging many of the working classes in industry for generations they had their livelihoods decimated in the 20th century as they were deemed no longer economically viable by the ruling classes of the day.  The experience of working class alienation from the establishment appears to be embedded in the memory of sections of the working classes, particularly the ‘left behind’.  The process of being consumed as a commodity (utilised when needed and discarded when not economically viable) came to a head in the Industrial Revolution and has repeated itself in varying degrees throughout history.  The methods of long hours, poor diet, strenuous, repetitive and poorly rewarded work were used to maintain the status quo and when workers revolted it was met with institutional violence; the eventual result is extreme apathy.  This extreme apathy is still evident in working class communities today; aimless lives are not just a result of poor choices but also a matter of decades of social conditioning. There are many echoes here of the experience and legacy of slavery.
1 Robin Gamble, The Irrelevant Church. Tunbridge Wells: Monarch,1991, p20-21.
2 Engels, Frederick. The Condition of the Working Classes in England. London: Grafton Books, 1882, [1969].
3  William Booth In Darkest England. London: Charles Knight & Co Ltd, 1970.