MJR Presentation at the House of Lords - 10th November 2015

On Tuesday 10 November I was privileged to be invited to the House of Lords by Baroness Cox to hear the Movement for Justice and Reconciliation present the case for the legacy of slavery. Members of both Parliamentary Houses and many guests heard details of how the legacy of slavery is still impacting on today’s society in what was a truly inspiring meeting. In just two hours, under the insightful chairmanship of Baroness Cox, people from a number of racial backgrounds and walks of life shared their insights on the contemporary consequences of colonial slavery, in the very building in which the Emancipation Act was passed in 1833.

Indeed, there was a sense of history in the making at this meeting, which united people with a passion for seeing ‘history past’ re-written in acknowledgment of the pain and injustice of slavery, and for seeing ‘history future’ re-shaped as positive ways are sought to come to terms with its legacies.

The meeting room was full to capacity, with 48 in attendance. After a warm welcome from Baroness Cox, whose passion for the topic was evident, ten speakers including MPs, academics and members of the clergy offered short presentations before the floor was opened for questions and comments from other delegates. Presentations were made by Revd Les Isaac, Professor James Walvin (York University), Jenny Cooper, Khareem Jamal, Revd Alton Bell, Stephen Timms MP (East Ham), Nigel Pocock, Professor John Wolffe (Open University), Bishop Dr Delroy Hall (Church of God of Prophecy) and Revd Dr Clifford Hill. 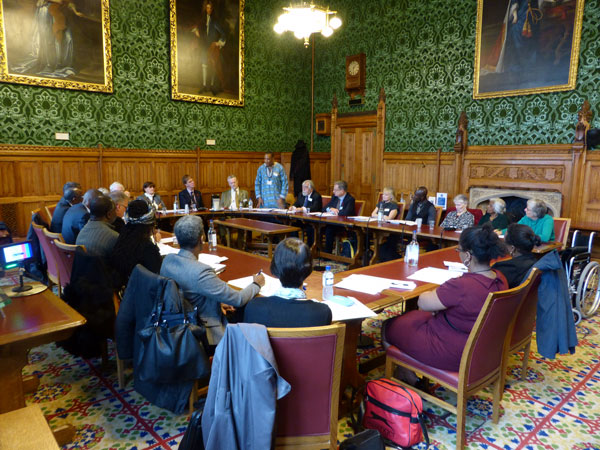 As the meeting progressed, slavery went from being an impersonal, overwhelmingly large and historical issue to being grounded in gritty, personal and contemporary insights on mental health disorders, identity denial, shame complexes, dysfunctional families and changes to the National Curriculum.

Emphasis was put on the emerging research consensus that traumas inflicted on slaves hundreds of years ago (e.g. physical, psychological) have passed down the generations, leaving scars on their descendants in mind, body and spirit. Thought-provoking speeches were made about how black communities in Britain today suffer much greater levels of deprivation, poorer mental and physical health, higher rates of imprisonment and strong senses of hopelessness and despair - to name a few manifestations of the ‘curse’ of slavery.

After the presentations the floor was opened for comments, giving other delegates the opportunity to contribute. Heartfelt personal stories were mingled with calls for new narratives about slavery in education and the mass media.

What became apparent as different perspectives were shared is that this issue is relevant to everyone in Britain, regardless of their racial and cultural background. It is fundamentally a white British issue as well as a black Afro-Caribbean issue. It has created a landscape of abundant wealth and grinding poverty, of astounding privilege and undeniable injustice, that defines all of our lives today as much as it did 200 years ago - and as much as Britain is still defined by cups of [colonial] tea, cake with [colonial] sugar, or pomp and circumstance.

Yet, not only has the injustice of slavery never been formally acknowledged or apologised for by Britain, but most Britons lack any understanding of how it has profoundly affected their own psyche, culture and quality of life (David Cameron’s recent comment to Jamaicans that slavery is something from which we all need to move on is particularly telling). Ignorance and denial remain two of the biggest challenges facing MJR and its partners.

There was a sense of cross-sector unity present at the meeting which could only have been provided by the Holy Spirit – indeed, MP Stephen Timms commented that the Christian passion for justice and love is unmatched in the secular realm, and that this ‘unstoppable motivation’ makes churches key actors in any future response to this issue.

Several other speakers remarked on the resources that churches can offer in this respect, from therapies and counselling to strong community leadership, to providing senses of hope, family and destiny. Also implied here was the role that Christ alone can play in bringing freedom from all forms of oppression and bondage.

In all, the meeting provided an uplifting, informative platform from which MJR can begin its vital work. It was generally agreed that there is a long road ahead if these issues are to be properly addressed, and that quick laws and glib statements from politicians will not provide the whole answer. MJR’s particular contributions will include research, public promotion and community projects (such as the permanent installation of a replica of the Zong slave ship on the Thames as an educational facility).

What was also evident from the buzz in the chamber and the hallway after the meeting was that it had amounted to far more than a selection of short presentations - it had brought together like-minded, passionate people from vastly different sectors and communities, investing in existing relationships and establishing new ones. William Wilberforce may have left a legacy of unfinished business which has been steadfastly ignored for nearly 200 years, but MJR is certainly rallying a new generation of campaigners, driven by the same passion for justice that Wilberforce himself was given – a passion which is at the heart of God.

[The core paper for the event, 'Making the Case for the Legacy of Slavery, can be downloaded here.]
| Home | About | Legacy | Stories | Work | Projects |After the Flood | Resources | Exhibition | Who's Who | Contact | News | Support |