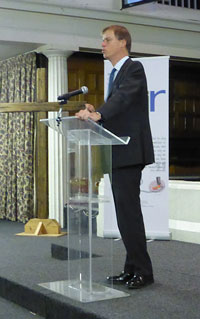 I warmly welcome this launch, and the aims that it represents.

I am the Member of Parliament for East Ham, in East London – in the London Borough of Newham, which Clifford and Monica know well.  And one thing that strikes me, in the community I represent, is the ways in which the churches influence the neighbourhood around them. There is one particularly obvious example – albeit of a rather trivial kind.  We have some big African-led churches on the Barking Road in Canning Town.  You can tell when you are getting near them by the shop names.  We have: “Redeem Travels”, “Amazing Grace Minimart” and – my favourite – “Signs and Wonders Hairstylists”! It always cheers me up to see those shops – and it makes an impression on the neighbourhood.

What I hope we are going to experience with this Movement is a different kind of impression being made by the churches.  An impression for Justice and Reconciliation; a move to address the lingering malevolent effects of slavery, which, as we have been hearing, still deeply scar our society.  I look forward to seeing that happening.

Of course, there is a great deal from history to encourage us.  It was through mobilisation in the churches – over 200 years ago – that the unstoppable pressure to abolish slavery was built.  It was the first big, democratic, popular political campaign in the world – and its been the model for democratic political campaigns around the world ever since. But a great deal remains to be done.  As the parliamentary debate around Modern Slavery has highlighted, the scourge of slavery is still with us.  And the legacy of the evil which was abolished by Parliament in 1833 is still, as we have been hearing this evening, very definitely with us.

People sometimes say the churches really don’t make much impact any more.  But I think they’re wrong.  It seems to me we are today seeing the churches not just growing – and, in London, churches certainly are growing today, with the Church of England building new churches for the first time since the 1950s – but also making a big and positive impact in all kinds of ways.  Not just on the shop names!

The most remarkable, I think, has been the foodbank movement.  If we had had a discussion ten years ago about what would happen if hundreds of thousands of families could no longer afford enough food, I don’t think we would have predicted – I certainly would not have – that it would be the churches which would step in to the breach. But that is what has happened.  The foodbanks linked to Trussell Trust – every one of them based on a church – provided food for over a million families in the past year.  It has turned out, in modern Britain, in what we often consider these days a rather irreligious country, that the churches, uniquely, have had both the motivation and – perhaps more surprisingly – the capacity to deliver the help that’s been needed, when nobody else could or would.  They haven’t solved the problem of hunger, but they have certainly helped to ease it – and without them, many would have suffered catastrophe.

And that fact that it has been the churches that have stepped up to deal with that crisis tells us something important – and, to many people, something quite surprising – about the realities in modern Britain; and about who it is who can really changes things for the better in Britain today.  The churches, it seems, have a great deal to offer. And I hope we will see this Movement making a reality of some more of that potential in addressing the legacy of slavery, in changing some of the entrenched attitudes and behaviours which were established in our society by slavery and which still persist today.

The former Bishop of Durham, Tom Wright, wrote this in his book “Surprised by Hope”: “People who believe in the Resurrection, in God making a whole new world in which everything will be set right at last, are unstoppably motivated to work for that new world in the present.” I really hope that will be the unstoppable motivation for justice and reconciliation which will drive this movement in the months ahead.
| Home | About | Legacy | Stories | Work | Projects |After the Flood | Resources | Exhibition | Who's Who | Contact | News | Support |